Well, I’ve been talking about my almond milk post often enough recently–using it in other recipes and such. But a couple weeks ago, I became curious about coconut milk. I’ve had almond milk flavored with coconut…but not coconut milk. So I tried it. And it was awesome, despite the fact that I don’t really like coconut. But I hate the thickness of it. Maybe it’s the brand I bought, but it’s just far too thick. So I thought, “I can make this better.”

And I bought a coconut.

And I made some milk. 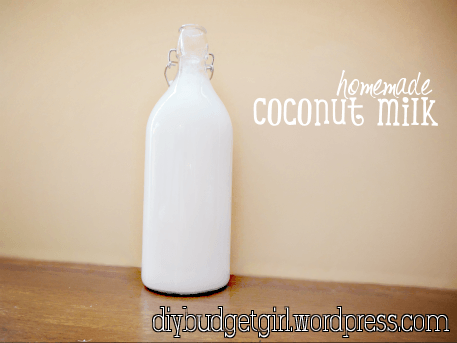 Note: You do not need a whole coconut for this. You can buy unsweetened coconut flakes and skip down to Step 3.

What you’ll need (this is for a whole bottle for me–you can halve this):

Step 01: Open your coconut. Zach just hammered a screwdriver into one of the eyes. It took some patience, but it opened the coconut fairly successfully.

Step 02: Remove the meat. This was the hardest, most time-consuming part. I spent maybe…an hour doing this? Apparently if you roast the coconut, the meat will slide right out. I’m going to try doing that next time. If you want to try that and see how you milk turns out, I would recommend it. I didn’t do it this time because I wanted to try to get coconut oil out of this, as well. (FYI, don’t be expecting a coconut oil post any time soon. All I wound up with was curdled milk.) Once that’s done, clean up the mess you made. Grr.

Step 03: Put your coconut meat (make sure it has no yellow spots!) or flakes into the blender with 4-5 cups of hot water. Blend for 2-3 minutes.

Step 04: The coconut doesn’t become as fine as almond meal does, so I didn’t feel the need to use any special filters. I just set up my bowl with a strainer and dumped the milk into it. Use a large spoon or a potato masher to squeeze the remaining milk out of the coconut.

Step 05: Funnel the milk into a bottle. You can drink it plain or flavor it however you want.

So which one do I prefer?

The coconut milk, if you use flakes instead of a coconut, is FAR easier to make. In a pinch, that would be my go-to milk of choice. But I think I prefer the taste of the almond milk. If you don’t particularly like almonds, this is a great substitution. It’s extremely oily, though, and eventually the oil will rise to the top, separate, and solidify. Almond milk also contains oils and will separate, but it’s easily fixed by shaking the bottle. You can, of course, strain the oil out of the coconut milk once solidification occurs. Problem solved. 🙂 (Also, the oil will become more of a problem the hotter you let the water become, I believe. The hotter water extracts more oil, which is probably why a lot of people say not to let it boil. It’s not a big enough problem for me to worry about, but heat the water as you see fit for your milk.) 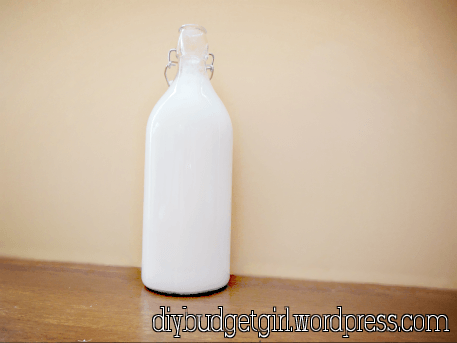 Love this! I’ve seen tons of recipes for almond milk but this is the first coconut milk one I’ve seen. Thanks for the tutorial and tips! I’m definitely going to try this because we use a lot of coconut milk in cooking.

Thanks! Just so you know, I actually JUST updated the recipe. Nothing hugely important–I just noticed that my milk tastes a little watered down, so doubling the coconut would probably be a good idea. Let me know how it turns out for you–especially if you use a real coconut! 🙂

Thanks for giving me the heads up. Was it hard for you to find a coconut in your local grocery store?

Shockingly, no. I figured I wouldn’t find a single one this time of year, but they had a small table full of them.