How to Reupholster a Dining Chair Seat + Dumpster Chair Reveal

Remember my dumpster chair? I finally finished it! Are you ready? (Note: This post will contain affiliate links. See more about my affiliations by reading my Disclosure Statement.)

Here’s what it looked like when I found it: 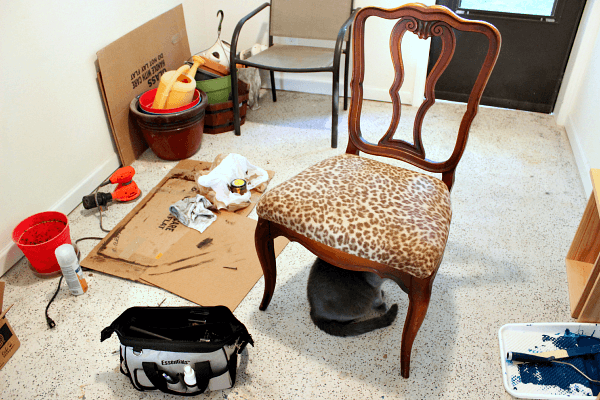 And then I removed the fleece blanket that the  previous owner had used to “reupholster” it (meaning, that was stapled on there but nothing else had been done). So it looked like this: 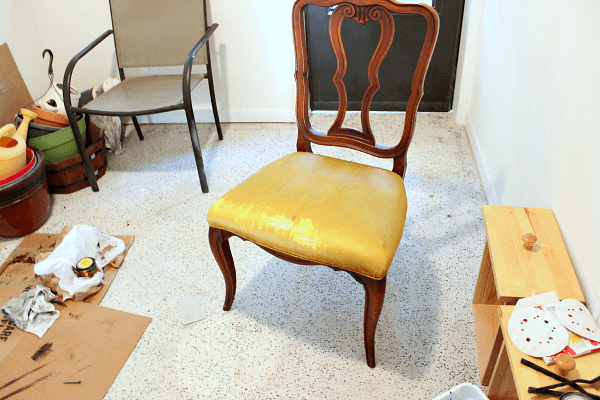 And it smelled HORRID. I’m pretty sure an animal peed on it.

So I took the seat off, scrubbed the wood (it was so filthy), lightly sanded, and primed. 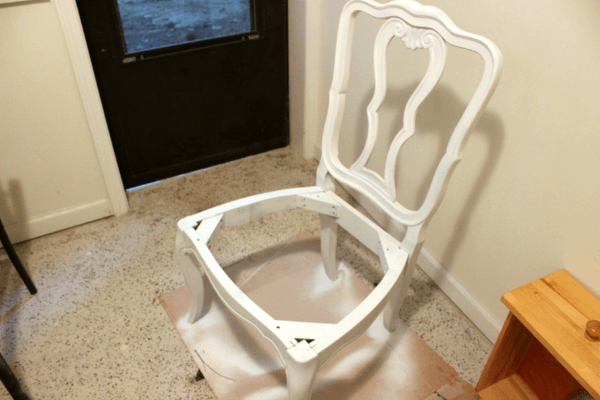 Which is where I left you about three weeks ago, isn’t it?

Well, it took me a while to get the paint done because I majorly screwed up. And then I couldn’t figure out how to do the cushion.

But I managed it. And now it looks like this: 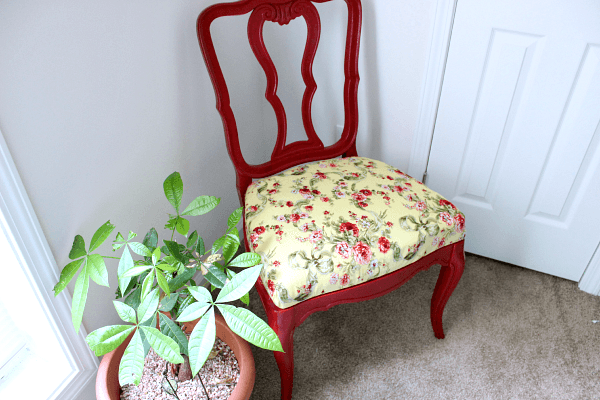 Let me just show you more. Yes, I am going into picture overload today. I’m just too excited NOT to show you this chair from as many angles as possible. 😛 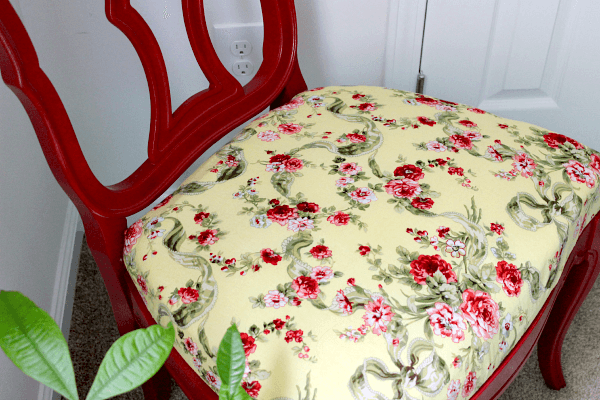 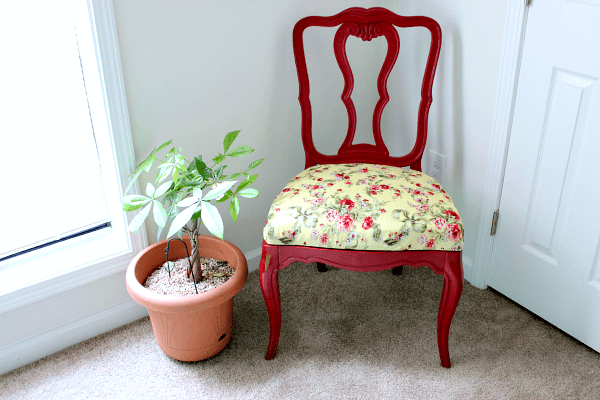 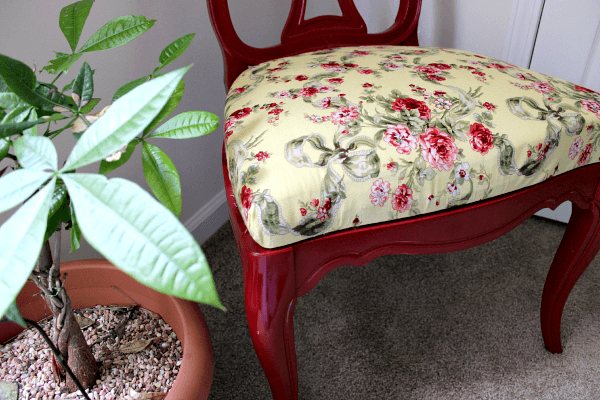 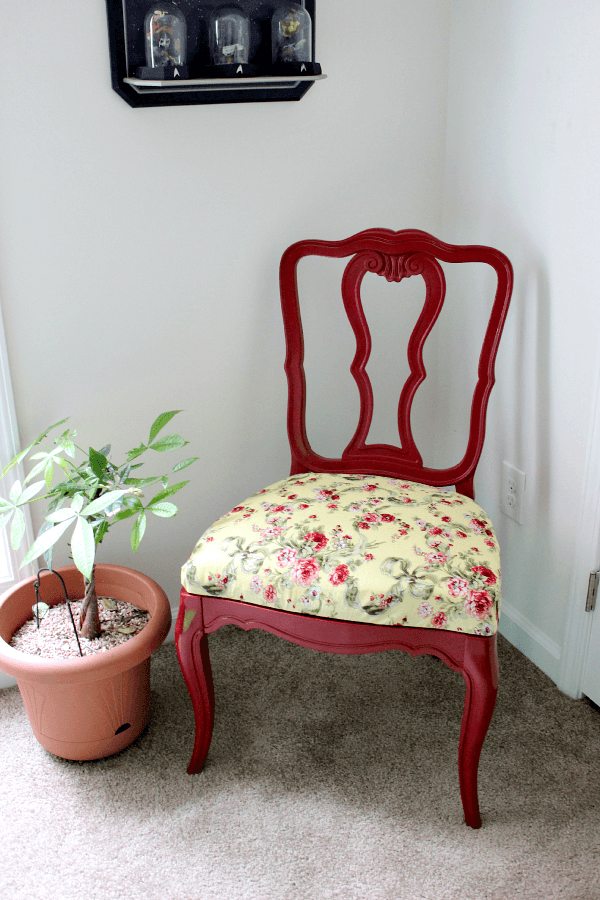 OK, let’s actually break this down.

How to Reupholster a Dining Chair Seat

Reupholstering a dining chair cushion looks so easy. What I found was that it is REALLY not. Here’s how I made it work, though.

Step 01: I tore out the old upholstery and threw away the cushion. It was filled with this nasty brown stuff and it smelled absolutely terrible. As I said earlier, I’m fairly sure it had been urinated on. It was gross. So after I got that taken off (which took a while), I threw it all out. Then I got my foam, which wasn’t quite big enough. So I laid my seat frame on two pieces, traced it, and cut it out, and glued them together. 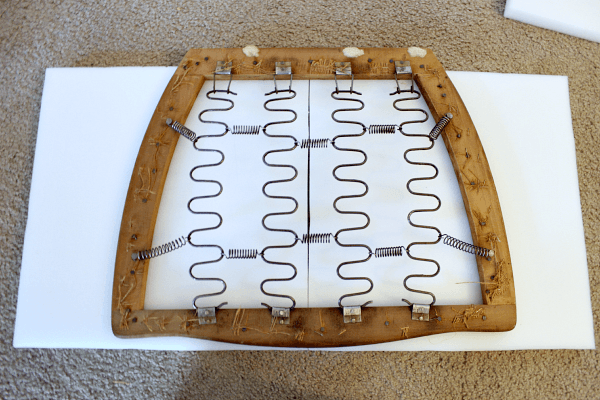 I did this twice, so the chair would have a lot of padding.

Step 02: I also cut out a piece of burlap to lay over those springs. I didn’t want my cushion to fall through the chair, so the burlap was necessary. I cut it into a square, stapled it to the frame, and then trimmed it down to size. 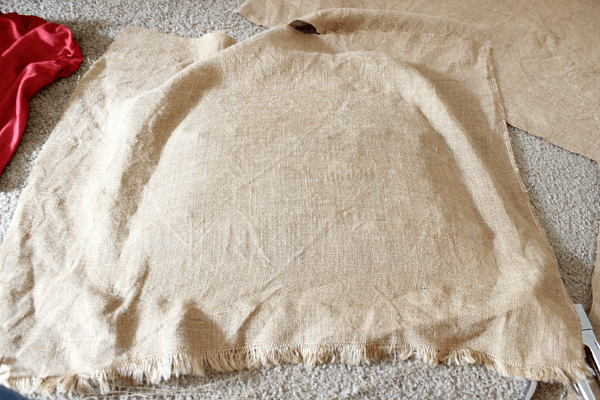 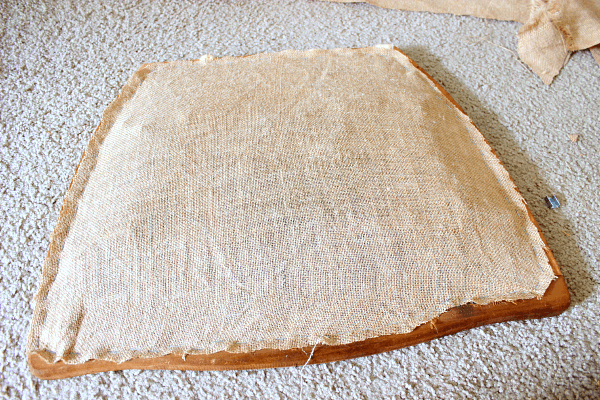 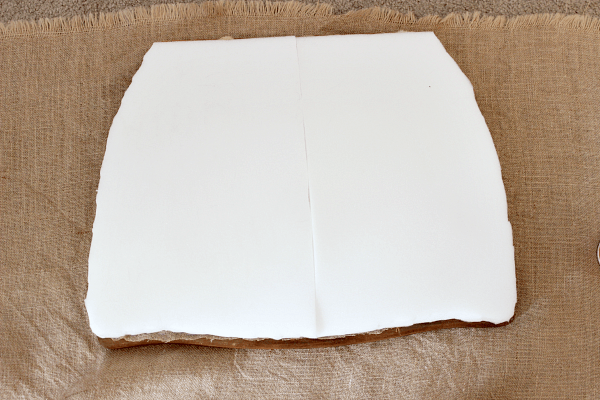 And then the fun began.

Step 03: I cut out a square of fabric and spent an hour and a half trying to figure out how to put it on the frame so it wouldn’t have creases. 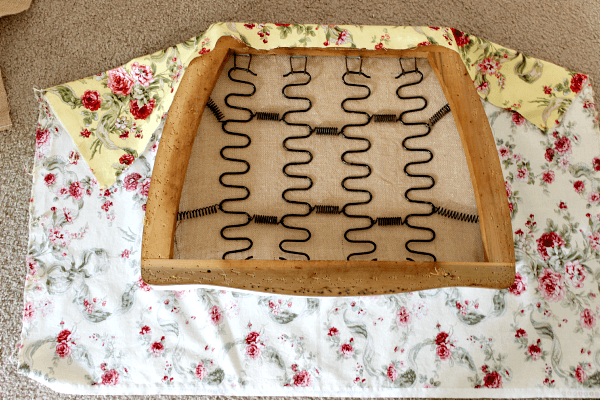 Once I figured it out (I folded the fabric over in a couple inconspicuous spots), I took my stapler and stapled the fabric down. The underside looked like this: 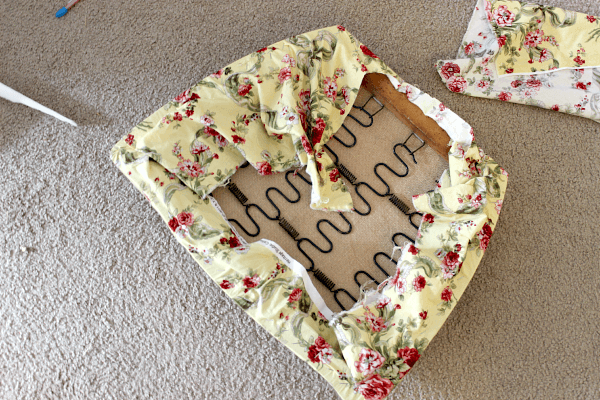 I didn’t want fabric poking out, but I also didn’t feel like trimming it. So I used more burlap to give it a slightly more professional-looking bottom. 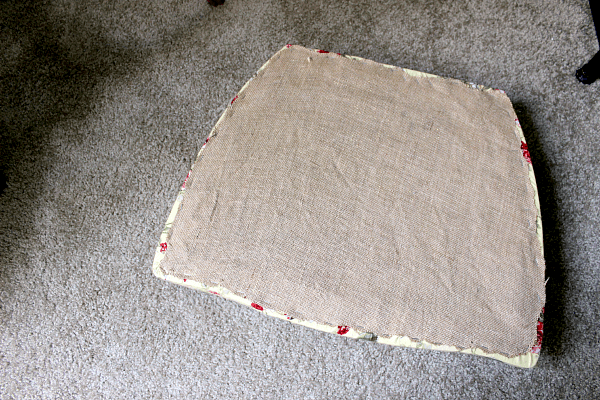 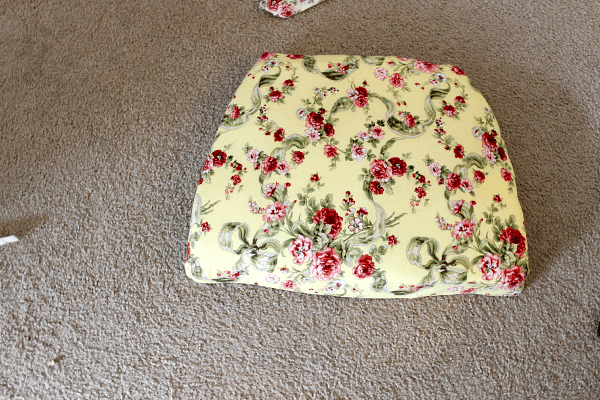 Then it was a simple matter of attaching the seat to the chair. It came with screws, so not a big deal. 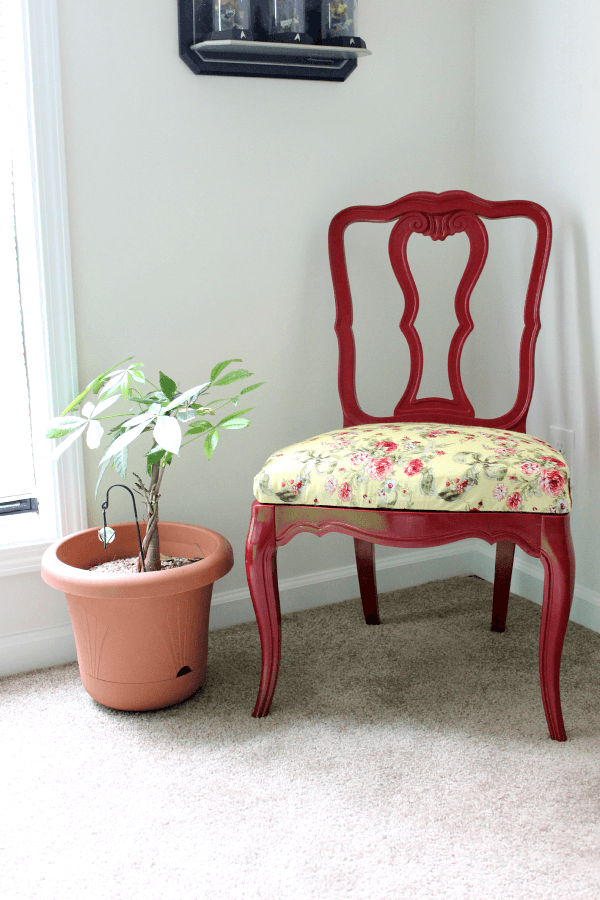 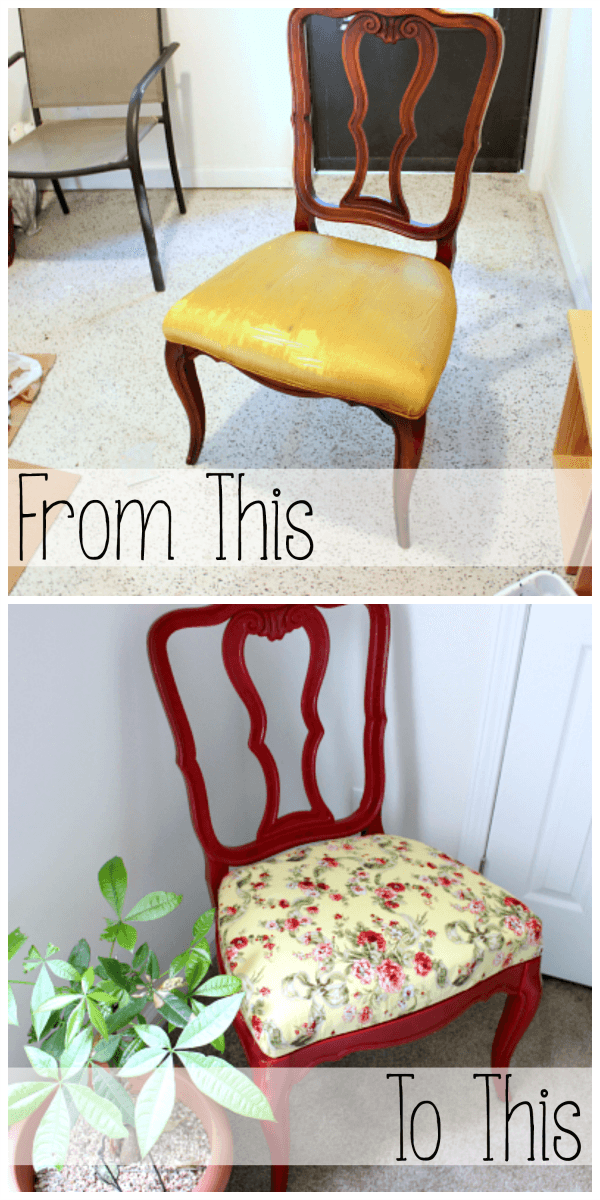 I love it! It came out even nicer than I hoped it would.

So it’s been decided–I’m decorating my guest room in red. 😀

What do you think? Have you ever reupholstered something? I’d loved to see it, so feel free to share it on my Facebook wall!

Why and How to Share Your Blog Posts on Tumblr

Learn to Embroider: What Tools Do I...

Home is Wherever I’m With You Printable

LOVE it! Great color and fabric choices! My favorite thing? That you chose to go with a glossy finish – it makes it so much more fun!
Julia @ It’s Always Ruetten recently posted…How to Rescue a Thrift Store Necklace

Thanks! 😀 As soon as I started picturing this in red, I KNEW it had to be glossy. It just works REALLY well with deep colors.

Absolutely beautiful! Thanks for sharing this over at Coffee & Conversation!
~Candy
Candy recently posted…Coffee and Conversation #2 {Link Party!}

I love how honest you were about the hard parts! But it looks so doable and I have some inspiration!

Haha! Thanks! 🙂 I was a bit frustrated when I started this because other blog posts I read said reupholstery was soooo easy. And then I did it and was like, “NOPE!” Maybe if you have someone helping you, it will be…because I kept wishing I had about another set of hands. Really, it was holding the seat AND trying to wrap cloth around it that I found so challenging. 😛 I’m glad you enjoyed my post, though, Helene! Thanks so much for stopping by!

Hi Chelsey!
I love this chair! The red is just perfect and your fabric is so pretty. You really made it look easy too, so I may get brave enough to try this one day now!
Thank you for sharing at Wake Up Wednesday!
Karen recently posted…DIY Tinted Lip Balm

Thanks! It seems to be more difficult depending on the chair of the chair, but overall not bad! I’d definitely recommend giving it a try if you have something you want to update. 🙂

Thanks for stopping by, Karen!

This came out great. I have a huge reupholster job to do when my husband finishes his assignment in Germany. I plan to put the chair and ottoman in the living room. It will give the room a pop of color.

Stopping by from Sew Crafty Angel’s link up party and a co-host. Stop by my blog when you have a moment.

I am also following. Follow me back 🙂
Alisha recently posted…Wake Up Wednesday Linky Party #19 and Giveaway!!

This is beautiful, I love the color and the fabric that you use. Thank you for sharing this wonderful DIY project that you did.
Reema @ Hospital Bed recently posted…The Suite Life: 4 Popular Hotel-Themed Television Shows