Home Back to Basics Stock vs Broth: Is there a difference? (Post includes recipes for stock and broth.)
Back to BasicsRecipes

Stock vs Broth: Is there a difference? (Post includes recipes for stock and broth.)

Today is the last day of Back to Basics. If you’ve missed anything and want to catch up, you can see a list of posts here.

Also, the giveaway I discussed a couple weeks ago ends today. If you’d like to enter to win a FREE Craftsy class of your choosing (up to a $59.99 value), please click here.

When you’re learning how to cook, you may notice just how expensive certain ingredients are. Chicken broth/stock, for instance. Fortunately, this is incredibly easy to just make. But which one should you use? A recipe calls for stock, but does that mean you can’t use broth? Of course not!

First, I–and many other cooks–always use them interchangeably because, as far as I”m concerned, they may as well be the same thing (even though they’re not). They’re both liquids made from vegetables, meat, and bones, and they can both be used for all the same things (namely, soups). There is a very slight difference, though, that can become noticeable when used in certain meals. So let’s go ahead and talk about stock vs broth. 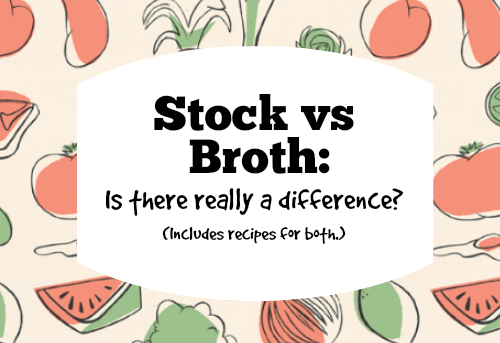 A stock is made by simmering vegetables, meat (optional), scraps, and bones (though a lot of people only use the bones). And that’s it. There is nothing added to it. No seasonings or anything. It has essentially no flavor, but it makes a great base for soups, sauces, and casseroles. You know you’ve made a stock correctly when you refrigerate it and it turns into a gelatin-like substance. This should happen every time with a stock, but not every time with a broth…depending on how you make it.

How to make a stock:

Step 01: Put the scraps and vegetables into a pot. Cover with water (until everything is just covered).
Step 02: Bring to a boil and reduce heat to a simmer. Simmer, uncovered, for 4 hours, occasionally skimmed off the foam.
Step 03: Run the stock through a fine-mesh strainer.
Step 04: Use immediately or pour into an air-tight container. Stock can be refrigerated for 1 week or frozen for 4 months.

Broths are made the same way as stocks–by slowly simmering vegetables, meat, scraps, and bones–but broth is more flavorful. With broth, you add seasonings, herbs, salts…anything that can give it some flavor. Basically, a broth would taste pretty good on its own, but a stock would just taste like watered-down meat juice. (Ew.) When making broth, bones and scraps are optional (some would even say they shouldn’t be used in a broth at all and that is the real difference…I disagree, but you can make yours however you want). If you’re roasting a whole chicken, though, using them is unavoidable.

Another quick point: broth can be made from vegetables, but stock cannot. Stock requires animal scraps.

How to make a broth:

Step 01: Put everything in a stock pot and cover with water.
Step 02: Bring to a boil and reduce heat. Cover and simmer for about 1 hour. Occasionally skim foam off the top.
Step 03: Pour liquid through a fine mesh strainer. If you want a clear broth, remove the meat (save for later or use immediately) and discard the herbs and vegetables. For a darker broth, press the liquid out of the vegetables and into the broth.
Step 04: Chill broth for a few hours. As fat rises to the top, skim it out and discard it.
Step 05: Use immediately or store for later. Broth will keep in the fridge for 1 week or in the freezer for 4 months.

If you want to make a vegetable broth (which is the most frugal way to go), there are all kinds of vegetable combinations you can use. I prefer tomatoes, mushrooms, carrots, celery, onions, cabbage, potatoes, and garlic. Experiment with different vegetables and see which flavor combos you like the best!

There isn’t a huge difference and you can pretty much use them interchangeably. I prefer to make a broth, since I’m going to season the stock anyway. But if you need something neutral so you can figure out how to flavor it according to the dish you make later, stock is the way to go. You can always simmer it again and add seasonings if you want.

Is there a certain way you prefer to make your stocks and broths?

How to Make the Perfect Lemonade Beer...

I am really liking this series, they include several things I hadn’t thought of before 🙂
TrineMarie recently posted…Cause For Celebration