This rainbow hue shift blanket knitting pattern is fun and easy to knit. The resulting blanket is also incredibly soft and heavy. Perfect for cooler months!

A while back I posted about my Jewel Hue Shift Afghan from Knit Picks. It took me a year and a half to make. After completing it, I couldn’t stop thinking about all the mistakes I made (I’m still fixing holes in it, because I didn’t learned how to pick up stitches until I was halfway through). Plus, I REALLY wanted to give the rainbow version a try.

Then some friends of mine asked if I could make one for them, and I was SO PSYCHED. Bonus: they wanted the rainbow one. YAY!

I determined that if I did one square a day, I could finish the main part of the blanket in about 3-4 months. I brought that up to 6 months to account for the border, weaving in ends, etc.

Then we, of course, bought and moved into a house. So there was a period of time where I didn’t do anything with it. So I actually wound up finishing this blanket in 8 months. Still better than my initial 18. 😛

I’m REALLY happy with how it turned out. 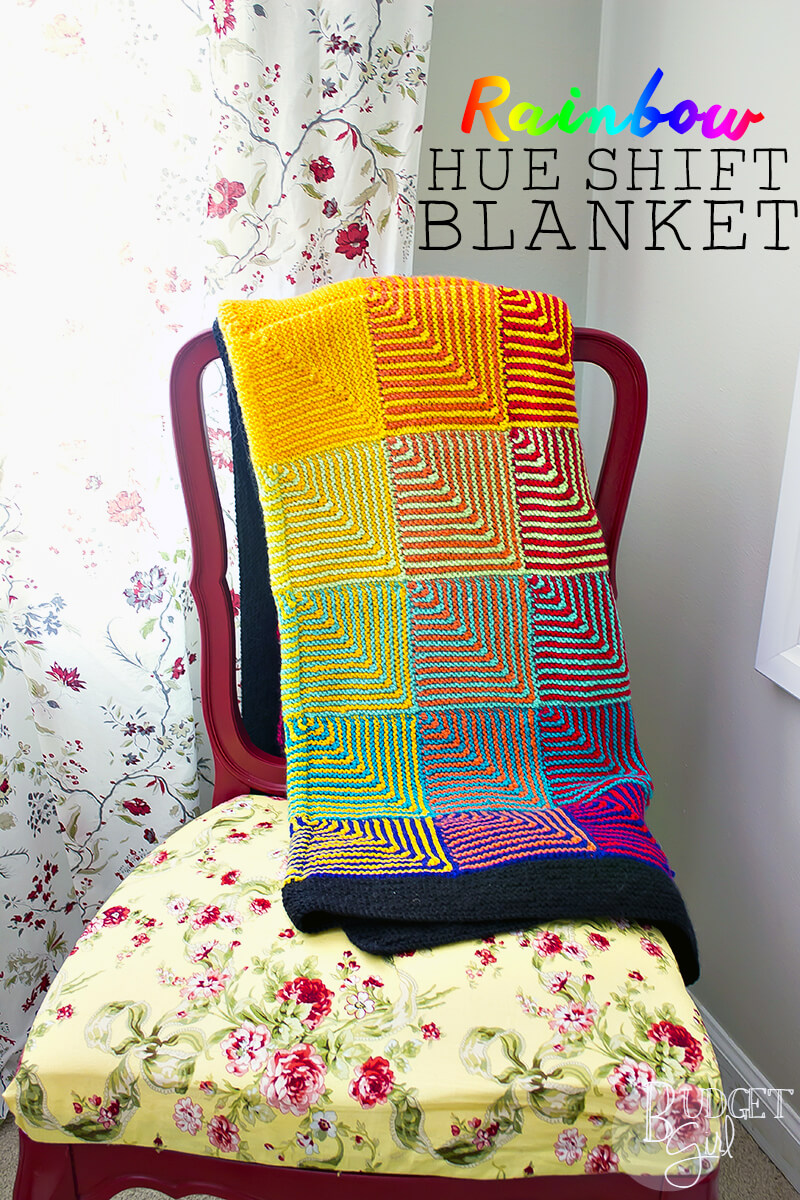 I made some changes, though. (Note: I do not own the rights to the pattern, so I will not be posting it.)

First, the pattern calls for US 5 knitting needles. Well, after running out of yarn with the jewel afghan, not to mention how the stitches didn’t sit as snugly as I wanted, I decided to go down a little. I used US 3 knitting needles. The stitches look a lot more polished and I’m glad I made this change. Especially because the “sport” weight is true sport in some colors, but a little thinner in others. Using smaller needles seemed to make the differences less obvious (or maybe they just stuck out to me in the first blanket because I knew they were there). 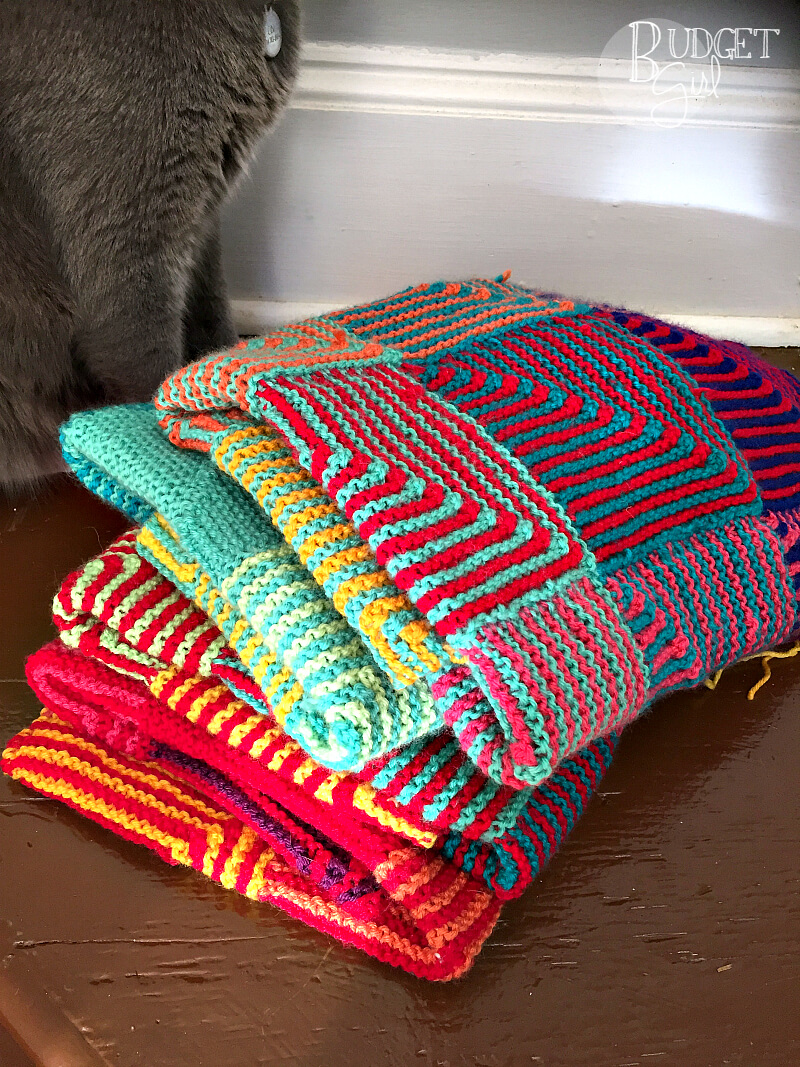 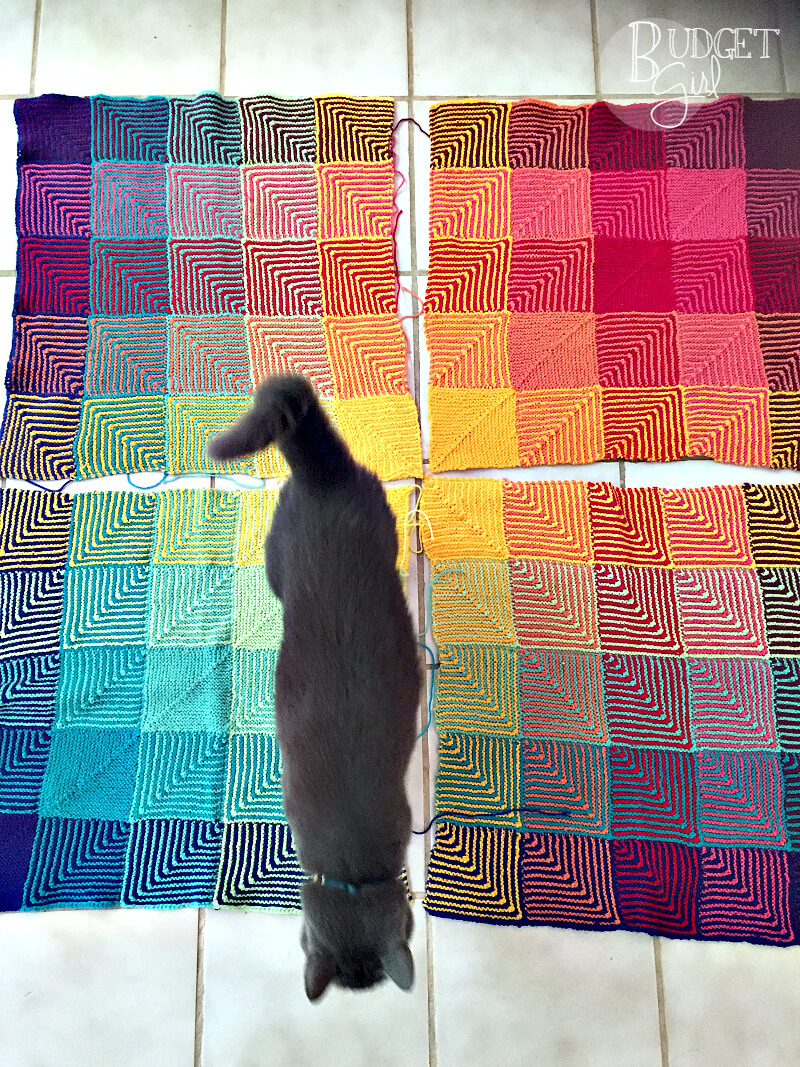 (This cat follows me everywhere. Friends keep saying their animals aren’t allowed on the blanket, but mine already got to it. 😛 )

Anyway, despite using needles that were two sizes smaller than the recommended ones, and despite the fact that I didn’t make the same yarn-eating mistakes I made with the first kit, I STILL ran out of yarn in certain colors (orange and both of the yellow hues).

This time, instead of eating the cost of buying extra yarn, I sent an email to customer support letting them know that I had had this problem with their kit twice. So they refunded me for the cost of the yarn. It’s an annoying problem to have, but Knit Picks’ customer service is top-notch. At least there’s that.

Plus the Brava Sports Yarn is just so nice to work with. Worth it.

Anyway, once the four quarters were done, I sewed the pieces together. One thing my large dining table is handy for: 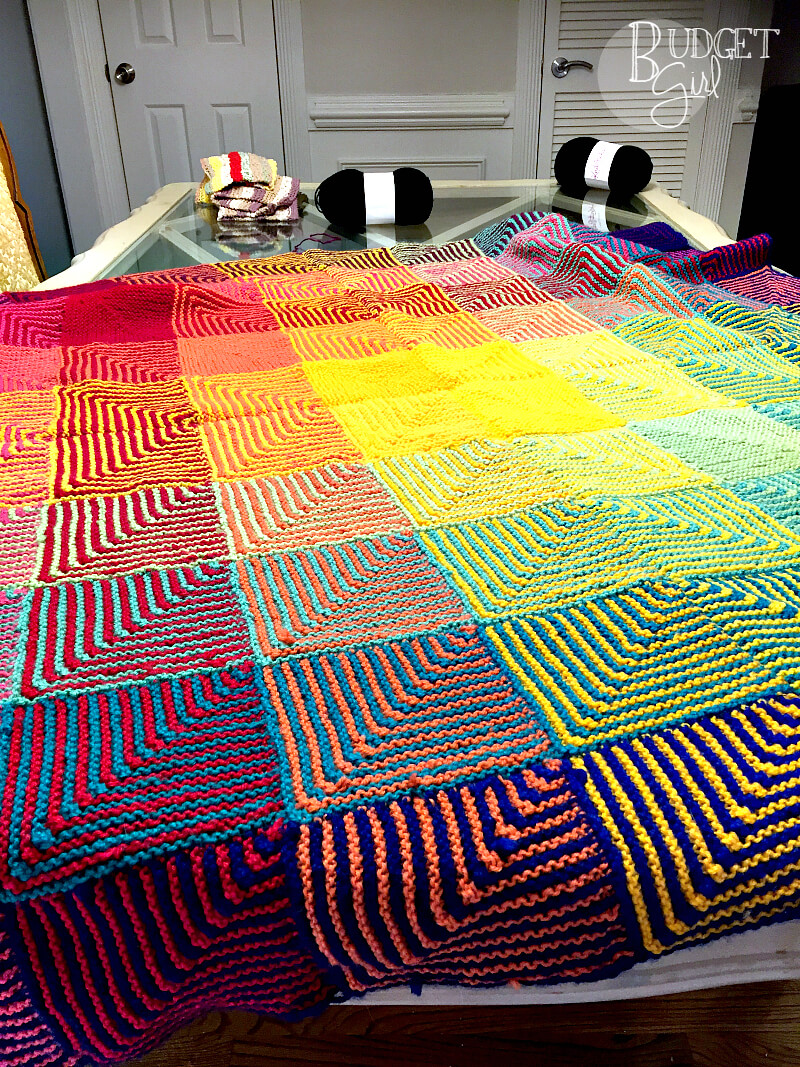 When it comes to working on the quarters, people get really confused when they learn I’m making a blanket. 😛 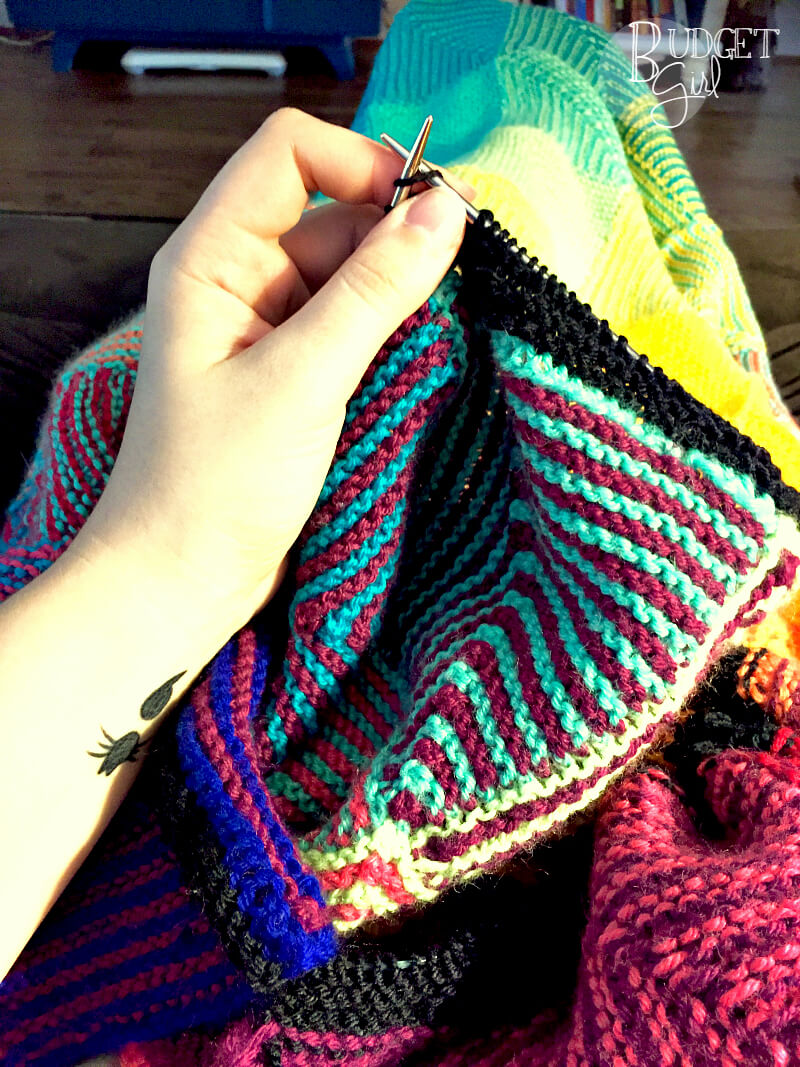 I absolutely LOVE working this pattern…right up until I get to the border. The border is so tedious and LONG. There have been times where I’ve dropped a stitch and had to tear apart the stitches in the squares. I’m TERRIFIED I’ll do that in the border (250 stitches minimum stresses me out. Which is why this is my favorite blanket pattern, because I don’t have to do 250 min throughout the ENTIRE blanket). 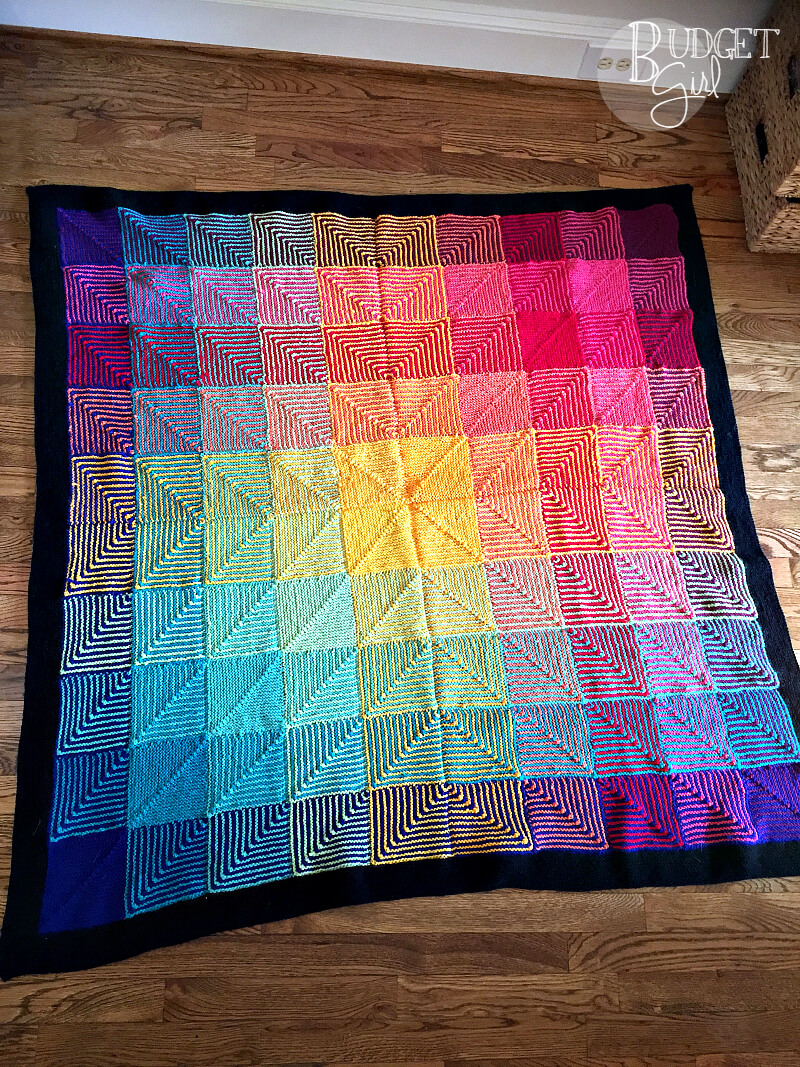 Picking up and knitting stitches worked WAY better than knitting a square, casting off, and then casting on for a new square. This blanket looks so much nicer than my first one (I’m debating on doing the first one all over again, in fact). 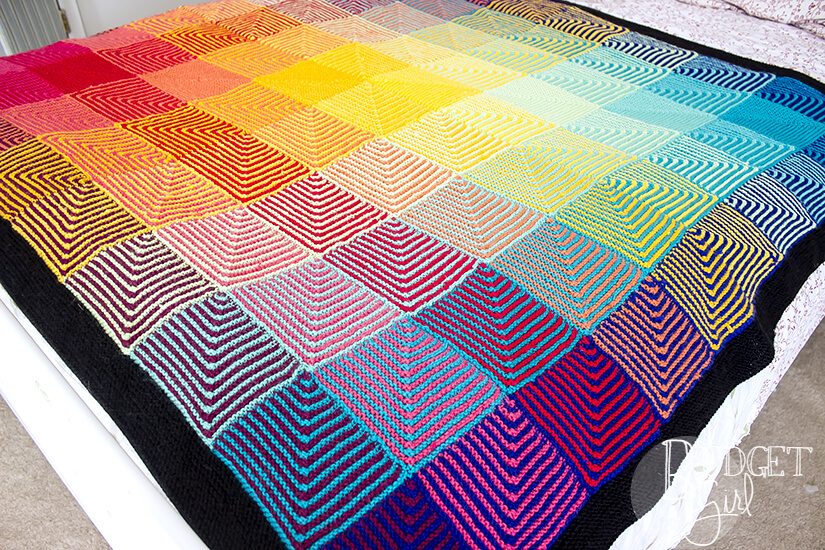 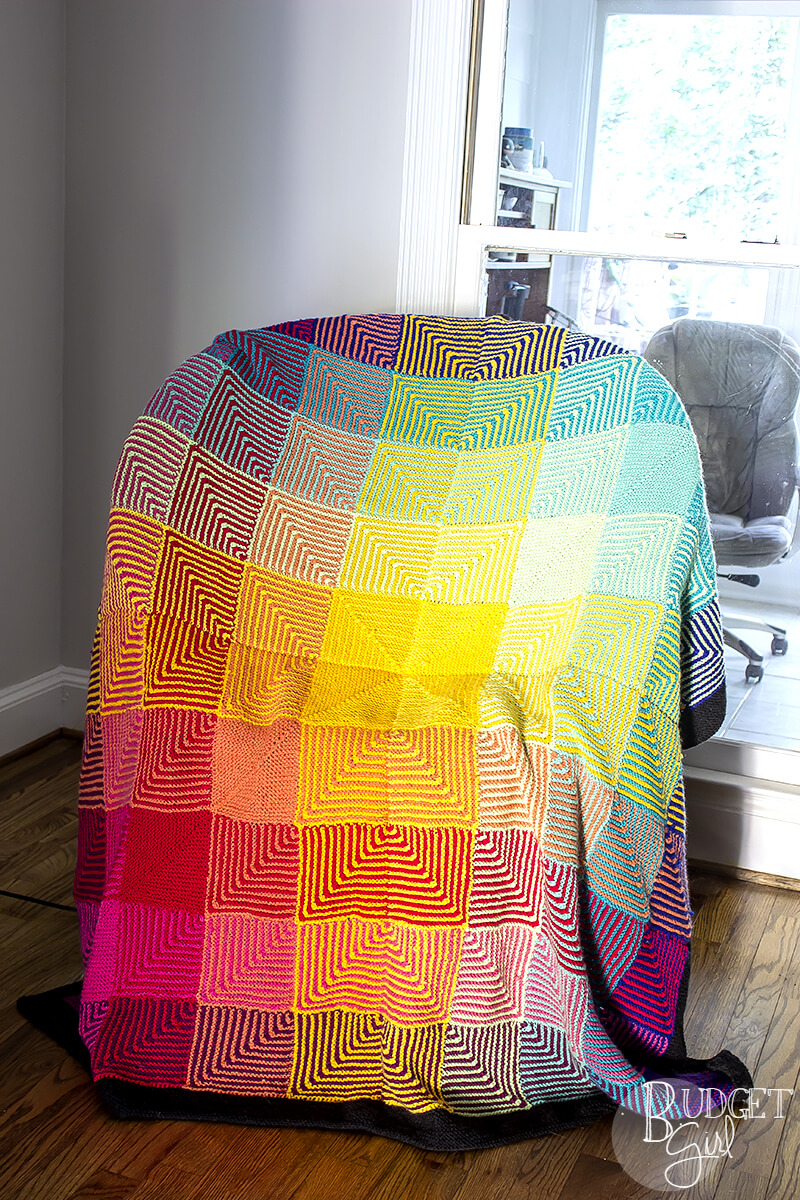 I’m going to be sad giving this away, but they’ll get a lot of joy out of it.

Also, I bought the kit for the baby hue shift blanket. It’s the same size, just done in pastels. So give me about another 8 months to post about that, too. 😛

For all you crocheters out there, Knit Picks wrote a crochet pattern for the rainbow hue shift blanket. So check it out!

Let me know what you think in the comments. Do you have any experiences with the rainbow hue shift blanket pattern?

How to Get Distressed Picture Frames

5 Lessons Every DIY-er Has to Learn

Such gorgeous creations, one of my favourite colour combinations!

That was a lot of work, but it’s beautiful.