Knitting requires a lot of little tools, which can become difficult to keep track of. Using regular household items to keep your knitting supplies in one place.

One thing I’ve been having trouble with since I started getting more into knitting is organizing knitting supplies. I have quite a few needles now, lots of hooks and markers. I also have a ton of yarn, but that’s a whole different problem, isn’t it?

It’s really important that I keep my supplies out of the way when people are over, but I also want to make sure it’s within reach when I’m actually knitting. Nothing’s worse than dropping a stitch and realizing your crochet hooks are all the way on the other side of the room, right?

So over the last few months, I’ve been trying out different solutions and figuring out what works best for me. I managed to find something! Which is really exciting. 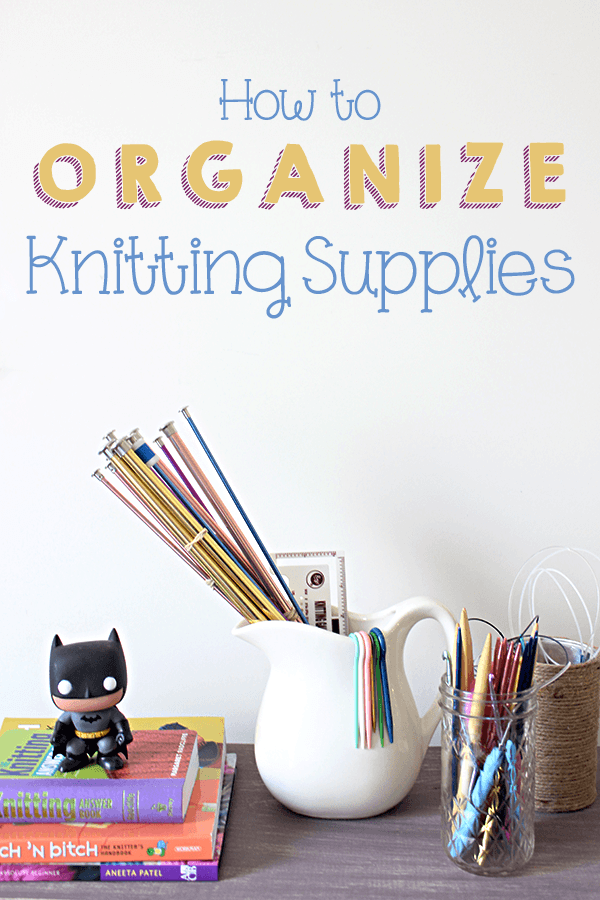 My first problem: what to do with all of the little things. They were everywhere! First I had them in a bag, but they kept falling out or getting lost in the bag. So I ran to Michael’s and got a straight mason jar. That worked for a while, but the jar was too deep and getting all those little things out was a huge pain.

I didn’t get a picture of this when I took all the others, for some reason, but I actually got a little plastic box from Michael’s for my small items. It holds my measuring tape, tallies, point protectors, and yarn needles. Here’s a photo of the box: 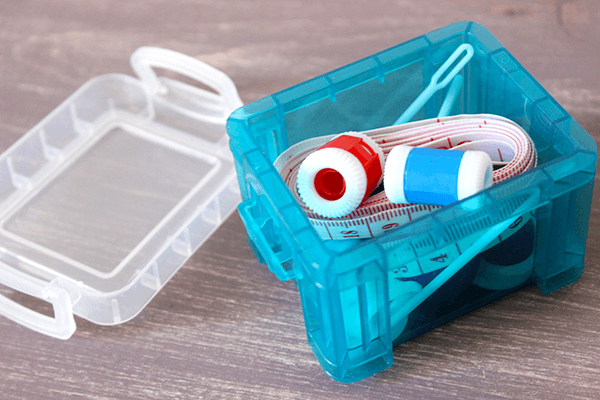 I kept the mason jar, of course! It holds things that I can grab easily when I need them. Mostly is has my crochet hooks, double-pointed needles, loom hooks, and a pair of scissors. 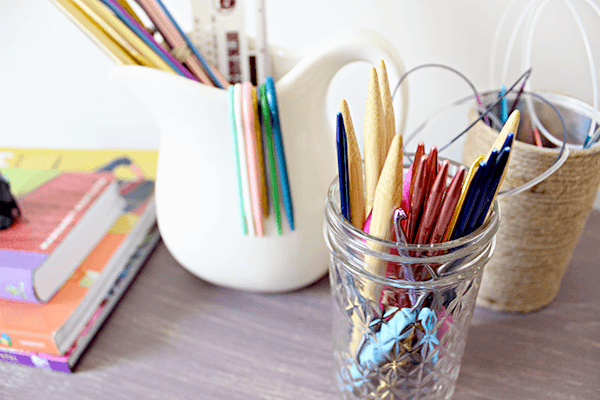 For a long time, I kept my circular needles in the mason jar with everything else. The problem is that circs get tangled up with everything. So they definitely needed to be by themselves.

Those of you who were around (or who have been snooping through my blog 😛 ) might remember the corded jars I made last March. I got that out and put the circular needles in that. They still get tangled up with each other, so I often roll them up and put rubber bands around them. It works pretty well. Either way, I’m not longer dumping all of my supplies on the floor when I need a pair of circular needles. So that’s nice! 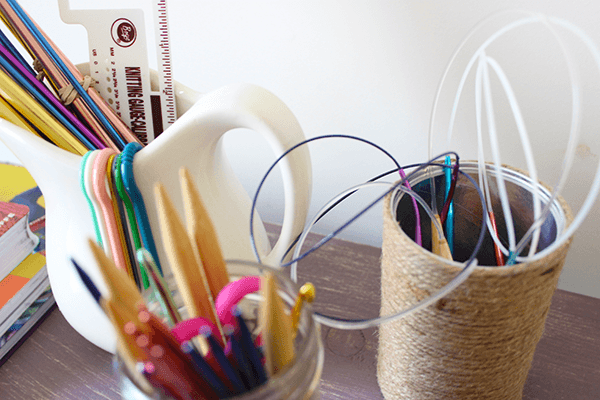 Finally, my straight needles. They were originally in the corded jar, but it just wasn’t big enough. They’re all aluminum, so they’re really heavy when they’re together. The corded jar kept falling over. 😛

So I found a white ceramic pitcher in my mom’s basement when I re-stained her kitchen table. It’s actually a very old flower vase. I threw out the flowers that were in it (they were broken and kind of gross), cleaned off all the grime that had collected during the 12 years this sat in her cold, damp basement, and I put my needles in it!

My cable needles also hang off the side. Which makes it very easy to grab them when needed. As you can see, my gauge is with the needles. 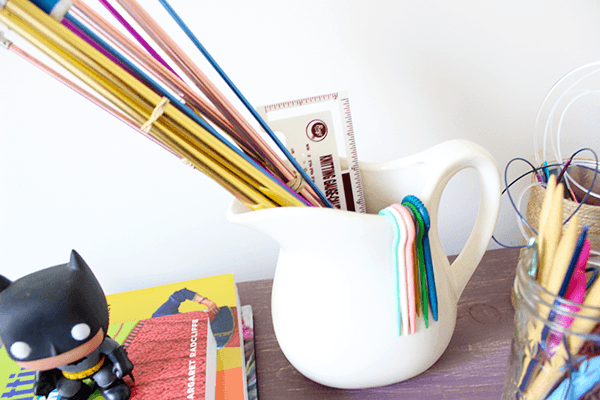 My needles kept swerving all over the pitcher, though. Every time I wanted to switch sizes, I had to go on a hunt for a matching pair. I took care of that problem by wrapping some rubber bands around them to keep them together. 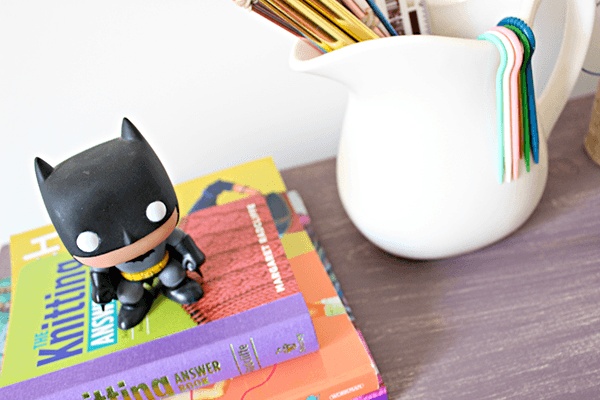 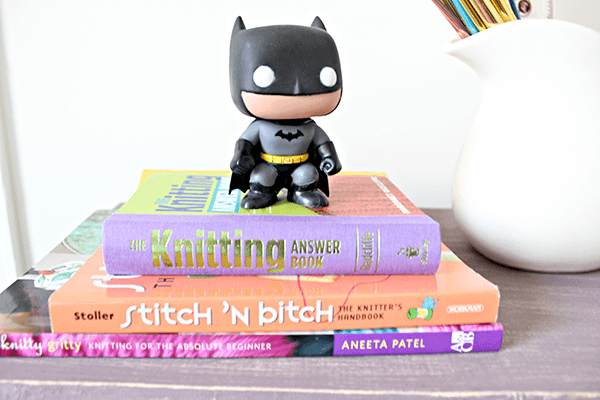 Finding my knitting supplies is way easier and far more enjoyable. And I love the way everything looks together! Batman gets in the way sometimes, but the I don’t need my books often enough to warrant removing him.

How do you manage to keep your knitting supplies together and organized?

Organize a Nightstand Drawer for Less than $5

Getting Back to Organized

How to Clean a Plastic Shower Curtain

That area is SO CUTE! I love it!

I should really organize my knitting supplies, which are currently scattered all over the house haha!

Haha! Sometimes it can’t be helped! 😛

Good ideas! Your knitting supplies look so tidy. I think I have too many things to organize this neatly. Lately my sewing – knitting room looks like a yarn explosion on some days. I have so many ideas and things I want to make and not enough time.

Yarn is definitely the hardest thing to organize. I’m still lost on that one, as well. -_-

Thanks for stopping by!

Hi Chelsey, I’m now following you by bloglovin. Maybe you could follow me too! Have a nice day!
Julie at Julie’s Lifestyle