The single most helpful thing I did while planning Zach’s party was staying organized. If you’re not a particularly organized person, this post should help you…because staying organized was so easy. All I did was make a party planning binder.

It was simple to make (since I used a free printable, which I will share with you in a moment) and it kept me in check. At one point, I had a bunch of post-its everywhere…but I was afraid Zach would find them and/or I would lose them and not remember what I wanted to do. So changes needed to be made. 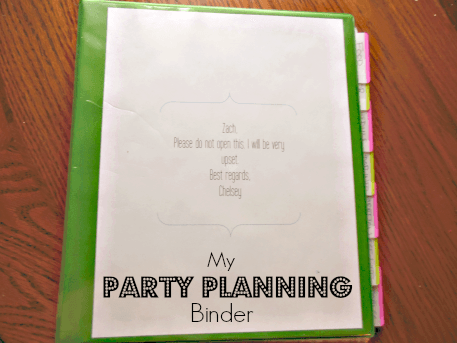 What I used my binder for:

This binder did all of that and more.

I also needed to find a way to keep Zach out of it, despite the fact that I knew I would screw up and leave it lying around the apartment. That was simple enough to take care of. 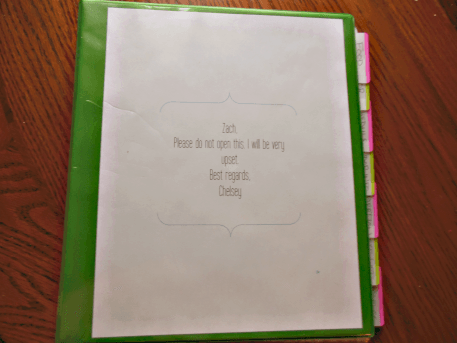 “Zach, Please do not open this. I will be very upset. Best regards, Chelsey” 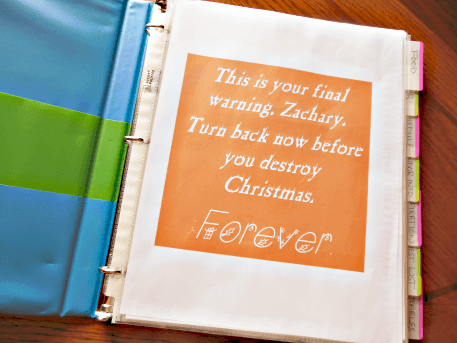 “This is your final warning, Zachary. Turn back now before you destroy Christmas. Forever.”

Fortunately, he also takes surprises very seriously. He saw the binder a couple of times and he HATES ruining surprises, so he chose not to look. Zach’s pretty good with honor system.

So how did I make my party binder? Pretty simple!

This binder was fantastic. All I had to do was slip the printables into the sheet protectors and slap some post-it tabs on there so I could easily find the section I needed. I actually wrote on the paper before putting it in the protectors, but you could also just write on the protectors instead (with the wet erase markers). 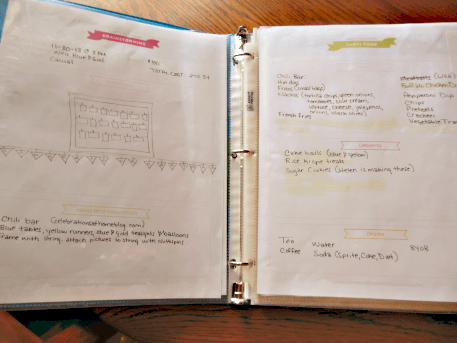 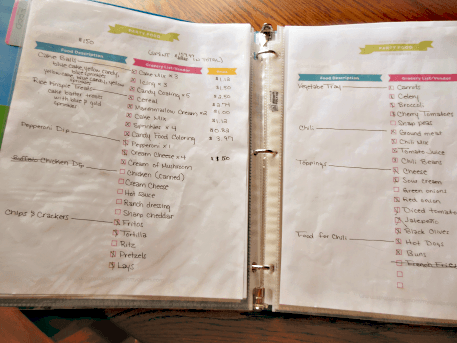 This came in handy for more than just the printables, though. 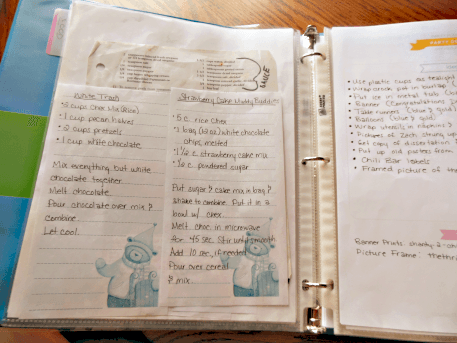 Behind each section, I put the things I needed. For instance, I wrote down all of the recipes I might need and slipped them behind my grocery list. 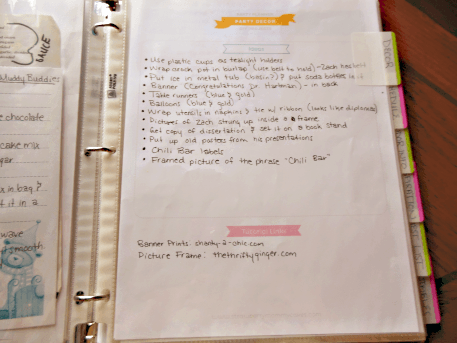 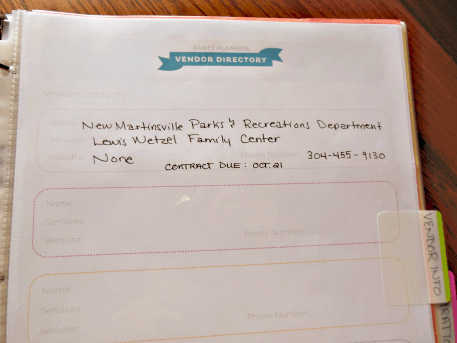 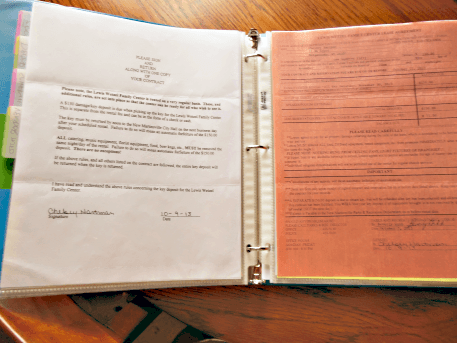 I kept copies of my vendor contracts, as well as the emergency numbers (police, mainly). Just in case. They also sent me a list of things I needed to do before returning the key, so I kept that, as well. 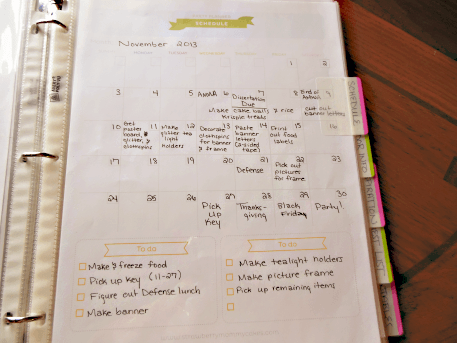 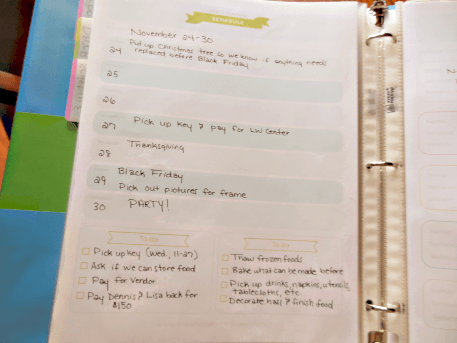 My only real complaint is that the “To-Do” list was kind of pathetic. I wish it had come with a separate page just for my to-do list. But I made do. 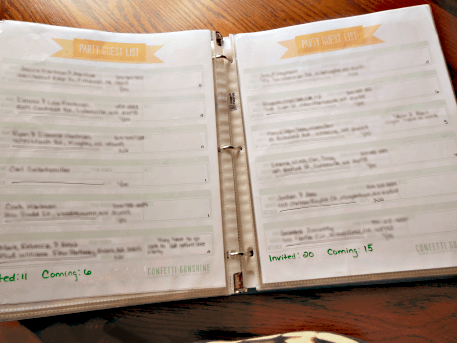 The original party planning printable didn’t come with a guest list, so I had to hunt that down. Which was fine. This was was pretty handy, because I could keep track of people’s addresses (for thank-you notes) and phone numbers (just in case). I could also write down their RSVP responses and add any notes (very useful for the many friends and family members who work shift jobs and weren’t sure if they could make it or not. That way I could write down “tentative yes” and still understand why I did that later).

I used a wet erase marker to keep track of numbers on the bottom of each page (and added them up on the last page). 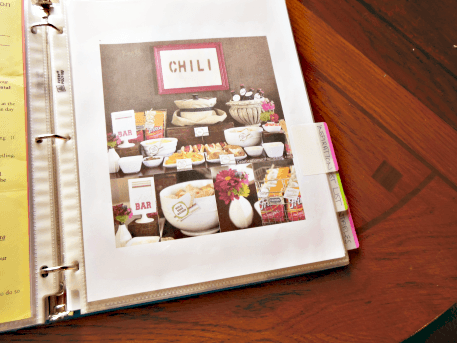 Of course, I had extra sheet protectors. So I used them to add all of the photos that I had gotten inspiration from. This was my favorite: Set Up a Chili Bar by Celebrations at Home. A friend of mine sent this to me in October when I was FREAKING OUT about money. (Because part of keeping the party a secret was keeping my spending low so Zach wouldn’t notice money pouring out of our bank account.) This saved my sanity. I already had my mom’s chili recipe, which is cheap and easy to make. So this really helped me. And it turned out really nicely! 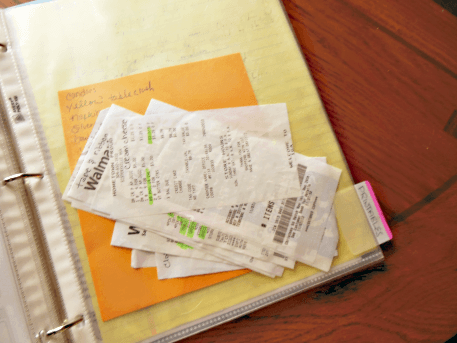 Finally, my receipts. I used another sheet protector to stuff my receipts in, so I could keep track of my budget. Since some party items were bought with other stuff, I used a highlighter to mark all of the items that were purchased for the party. And since stores use codes to indicate what item is what anymore…I also wrote what I bought (and how much the total for the party was) at the top of each receipt. This made it a lot easier when I went through my receipts later to write it down on the Shopping List pages of the binder, because then I didn’t have to translate codes when I couldn’t even remember what I had bought. (I made the mistake of not doing this on a couple receipts and, trust me, it’s harder than you would think to figure out what that code means a week later, when the purchase is no longer fresh in your mind.)

Also, keep all receipts with you when the cashier asks. A couple times, I had the receipt put into the bag…and then I forgot about it and it got thrown out. If I had put it in my pocket, like I should have, I would have just been able to go hunt for it later when I wanted to mark down the cost of my groceries. Always keep the receipt with you, not in the bags.

The reason I should have gone bigger than 1-1/2 inches is that I also used the binder to hold printables. The sign, for instance, I printed out one day while Zach was at work, so I could check the size and have them in case I didn’t have enough time alone to work on it. I wanted to wait until closer to the party to cut it, though, so the edges wouldn’t get bent or anything. I just stuck the printables in some empty sheet protectors. It was a great way to keep materials for projects with me, because I was really afraid that I would forget them.

This binder went with me everywhere. It was incredibly helpful and I felt pretty sad throwing the pages out. I’m reusing the binder for holding knitting patterns, though, so it’s all good. 😛

How do you stay organized when party planning?

Design Your Own Business Cards in PicMonkey

Home is Wherever I’m With You Printable