This giraffe embroidery is an adorable way to add some charm to a room. Change out the colors and fabrics to make it fit any style!

This post contains affiliate links. To learn more about my affiliations please read my disclosure statement.

It’s finally March and spring is closer! For whatever reason, when February and March roll around, I get really into bright colors. And my projects reflect that.

If you saw my State Embroidery guest post over at Live Randomly Simple this morning, then you already know this. If you haven’t, then let me explain!

For the last couple years, I’ve been telling Zach I want to learn embroidery. So for Christmas this year, he got me a ton of embroidery supplies. Enough to last me quite some time. Which is awesome, because it means I get to play around and experiment.

Anyway, one of the great things he got me was a book called Embroider Everything Workshop. It’s supposed to be one of the best books for learning embroidery. I wasn’t sure why, at first, because it felt like she was rambling a lot and jumping from topic to topic . I had a lot of unanswered questions throughout the first few chapters. But then I realized two things: 1) it came with a practice card so I could practice the stitches (with a guide) as she explained them, and 2) it came with a ton of iron-on patterns.

One of the patterns included was this awesome giraffe. For some reason, I’ve been wanting a giraffe of some sort in my living room and this seemed like a perfect solution! 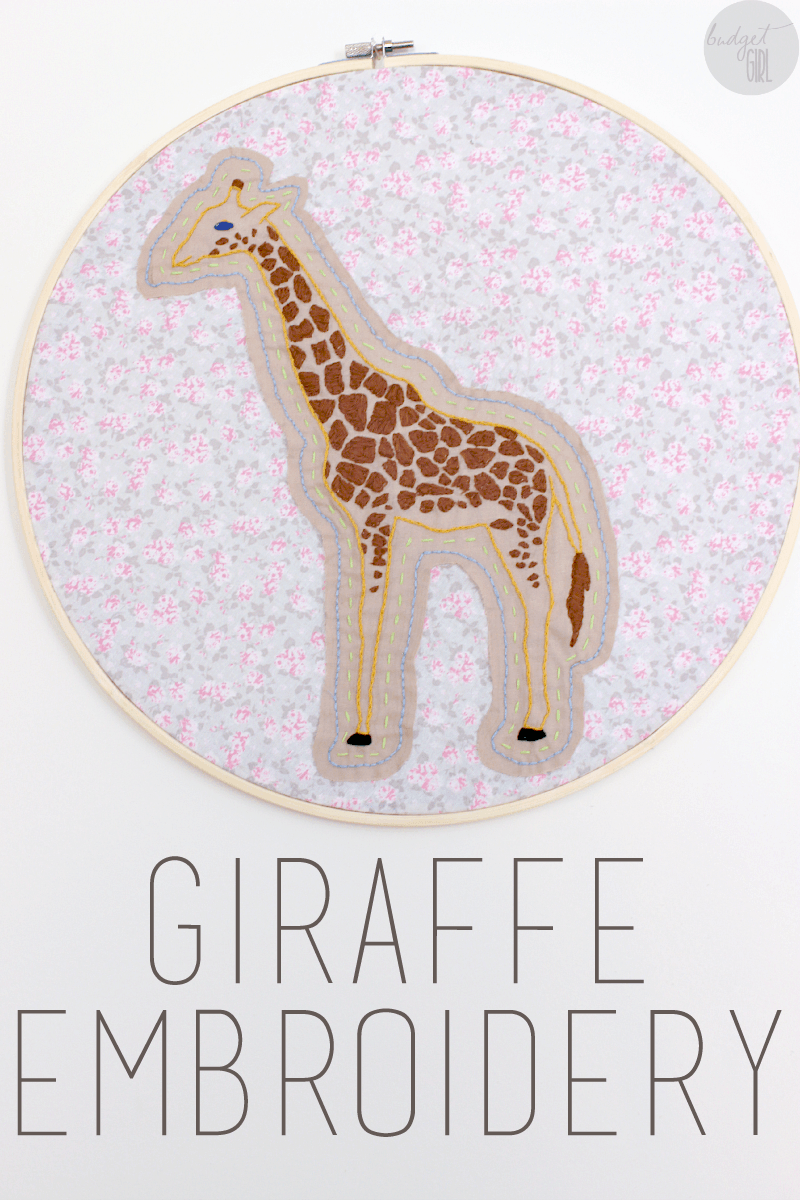 Step 01: First I cut out the giraffe and pinned it to the tan fabric. I ironed it for about 5 minutes, but the giraffe still wasn’t dark enough. Once I was confident I could see it, I went over it with a soft pencil to darken the lines so I could see it while I was sewing. 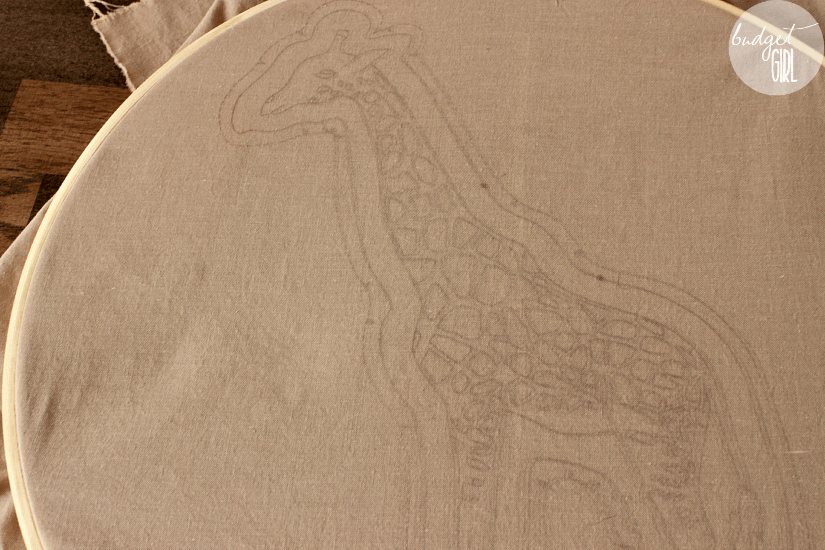 Step 02: I secured the tan fabric in the embroidery hoop. You don’t have to do this if you prefer to work without a hoop. I really like how much easier it is to see what I’m doing, though.

Step 03: With the brown thread, I outlined the giraffe’s spots using backstitch (which I explain how to do in my State Embroidery post. I even included a handy dandy image to show you exactly how to do it). Once the spots were outlined, I filled them with backstitch, as well. I considered doing satin stitch (which I’m much faster at), but for something that’s supposed to be a little furry, I thought the backstitch was a better choice.

Step 04: Once all of the spots were done (they took forever), I threaded my needle with king’s gold/dark yellow and outlined the giraffe using split stitch. Split stitch is a lot like backstitch, but you put your thread through the previous stitch rather than next to it. It also creates a much nicer line.

Step 05: Once the outline is done, you can quit if you want. But I didn’t think the embroidery popped enough. So the first thing I did was cut around the giraffe. The pattern I ironed on had two lines going around it. The innermost line was solid and the outermost was dashed. I cut along the dashed line.

Step 06: I pinned my giraffe cut-out to my floral fabric and then I aligned the fabric with the embroidery hoop and secured it. Using blue thread, I went around the solid outline using backstitch (it is the sturdiest stitch, which is also why it’s used in sewing projects. If you want to make those pillow covers from old shirts that I posted about a few months ago, this stitch is the one you want to use). This secured the giraffe to the new fabric, while also adding a little more color. 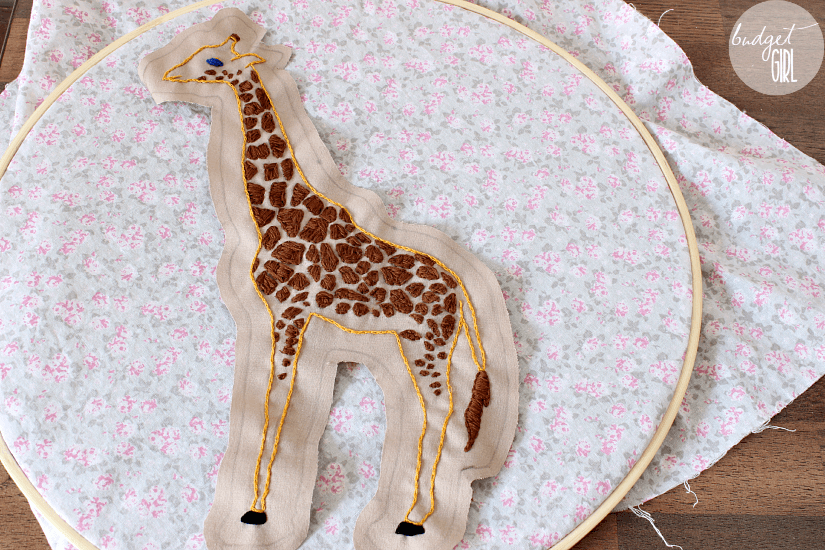 Step 07: Once the backstitch was done, I went around the giraffe again with green thread. But I put this in between the blue thread and the yellow thread. I just used a regular running stitch to do this. And after all those fancier stitches, I was so pleased by how fast running stitch was…and how much thread it doesn’t use. 😛 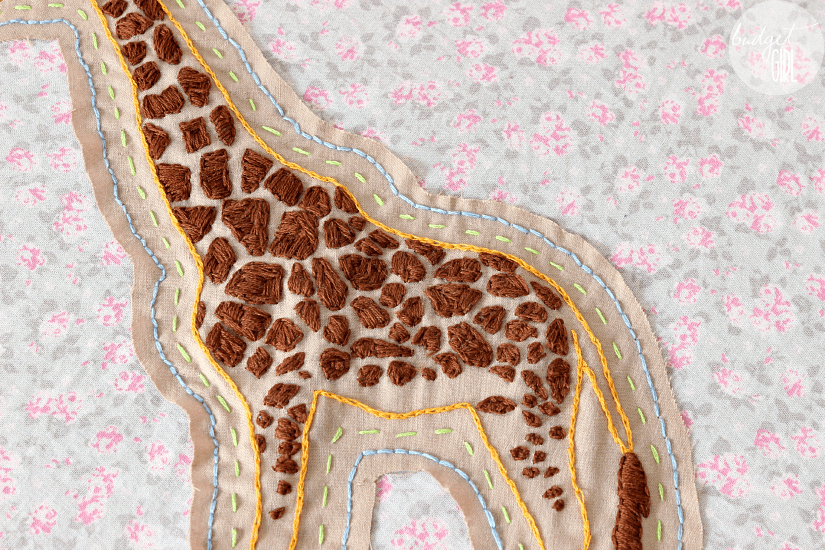 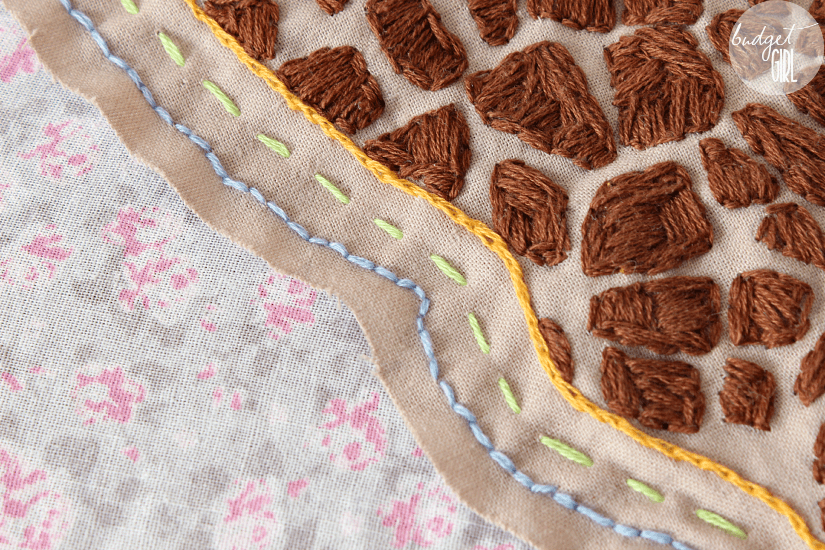 Step 08: Once I was happy with the way the embroidery looked, I cut the excess fabric off, leaving about an inch around the edges. Then I lined the inside of my hoop with tacky glue and folded the excess fabric over to secure it. One the glue dried, I hung it up! 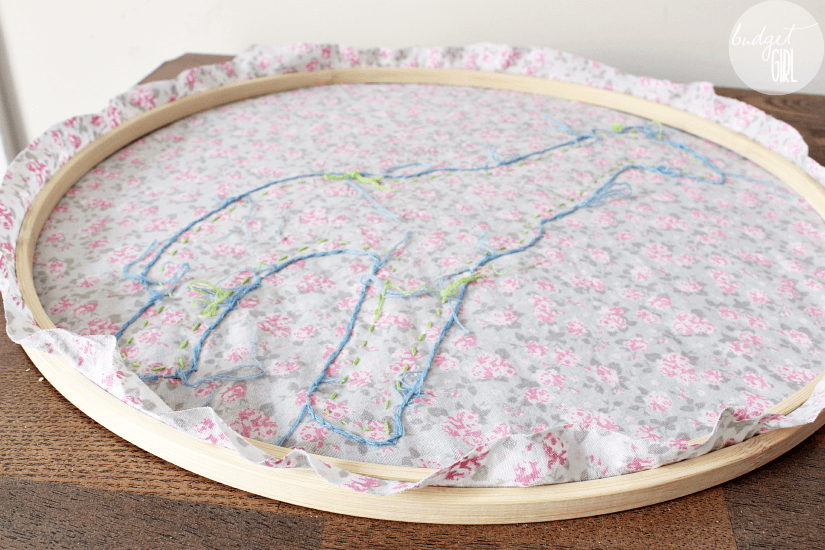 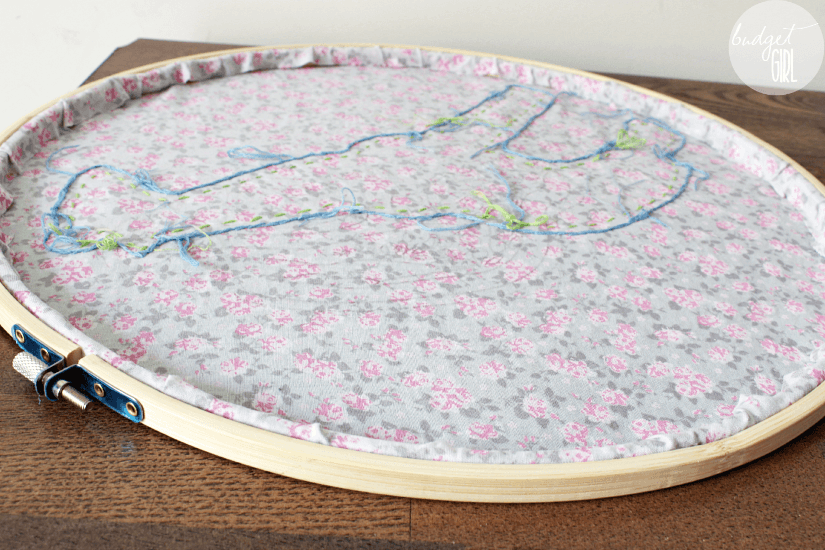 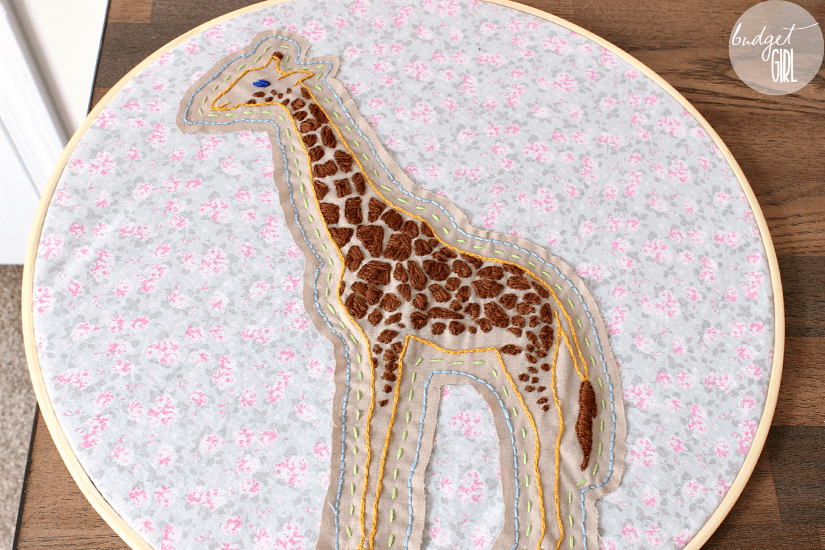 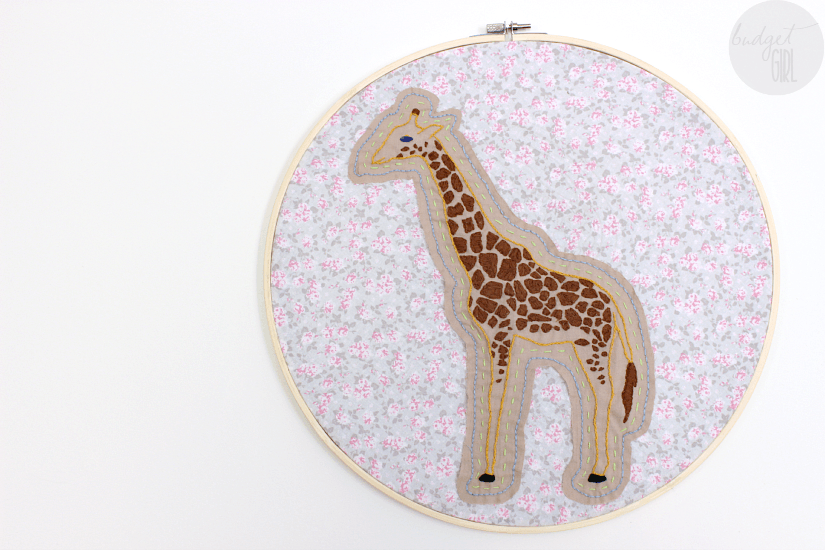 I got my fabric at Jo-Ann’s, though you could also find them at Wal-Mart (much cheaper, but fewer options). They’re the folded up squares that are lining the shelves. You don’t have to have them cut, they’re just a grab-and-go sample. PERFECT for a cheap embroidery fabric.

I hung it up over the TV in the living room, though I’m honestly not sure how I feel about in there. It’s just not quite as large as I would like for that space.

Plus when I took it into my spare room to get some photos, I really liked how it looked in there. It’s possible it will be migrating to that room in the future. 😛 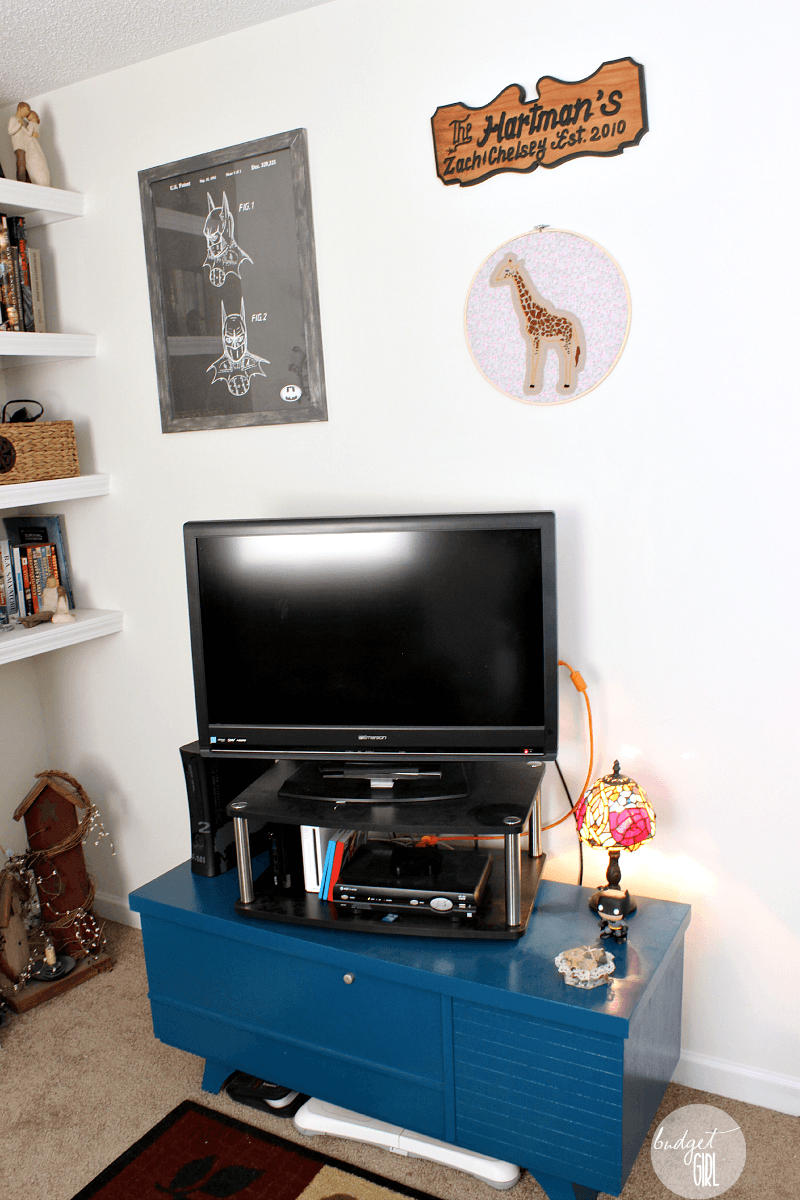 Also, Zach and I decided to use that cedar chest as a TV stand. Best decision ever!

What do you think? Have you ever considered learning embroidery? I have to say, it’s one of the easier things I’ve learned how to do!

How to Reupholster a Dining Chair Seat...

How to Refinish a Cabinet with Paint...

So.stinkin.cute! Good job, Chelsey! Love this…I haven’t embroidered in years and years. Used to love doing it, but then something came along (blogging) to take up all my free time! But, I may have to start sneaking in some time to embroider again…you’ve made me remember how much I loved it!

Thank you, Carole! Embroidery has definitely become a favorite of mine! 🙂

This is so cute! I wish I could sew better so I could make my own.

Not sure if you saw my comment on your State Pride Post, but…
Embroidery is something I have been wanting to get into. I have started a new pin board, and been looking around for guidance and inspiration. It looks so home, and fun.
I would love if you shared this/them at our Yarn Fanatic Link Party.

I’m loving this! You always bring such amazing things to our party. Pinned and tweeted. I hope to see you tonight at 7 at our party. I can’t wait! Lou Lou Girls

This is such a great craft idea. I love it!