I’m not going to post anything awesome today, since it’s the week of Christmas and I’m sure the majority of my readers are visiting their families.

Since winter is officially here now (even if West Virginia doesn’t realize it–it’s been in the 60’s all week), there are two things I’m getting into: soup and crock pot meals.

So today I’ve gone through old blog posts and I have found the top four crock pot meals that didn’t start as crock pot meals. And, no, they aren’t soup! 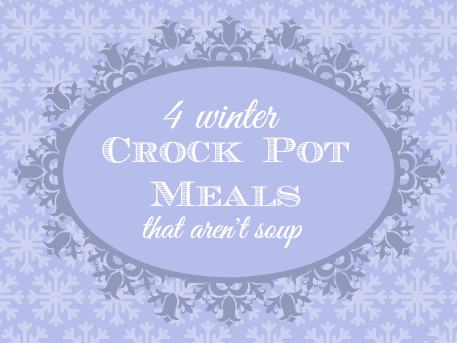 1. Apple Cider Ham: I realize that I initially did this in a pressure cooker, but it will translate to a crock pot. Toss all of your ingredients into the crock and set it to “low.” For a 2-3 pound ham, 6-8 hours in the crock pot should do it.

2. Easy Chicken Dinner: Again, this was not originally a crock pot meal, but it can be converted. Toss everything into your crock pot, set it to “low,” and cook for 3-4 hours or until chicken is cooked through. Easy!

3. The Absolute Best Pot Roast: Another pressure cooker meal. Pressure cooker recipes seem to be really easy to convert. Put everything in the crock pot together and cook on “low” for 6-8 hours.

4. Smothered Pork Chops: This was done in the oven, but can definitely go in a crock pot. I basically boiled them in the oven (weird, I know, but delicious). Put everything in the crock pot and cook on “low” for 6-8 hours.

You know what’s weird? Looking through all of my old posts and seeing what a terrible photographer I was. I’m still not perfect, but it’s much better now, isn’t it? 😛

Have a safe week!

The Most Irresistible Pistachio Pudding Cake

20 Sinful Desserts for People Who Love...

I should make another new years resolutions of making (trying out) more crock pot meals.

Haha! Crock pot meals are definitely awesome! I don’t know what I would do without my crock pot.