I’ve been having a ton of problems with my laptop lately, so I switched to my desktop. Zach built me this desktop in 2009, when I was finishing college (when my other computer started failing on me–also due to old age). He built a small computer so I would be able to carry it back and forth between my dorm and my mom’s house.

Here’s a picture, so you can see how small this computer is: 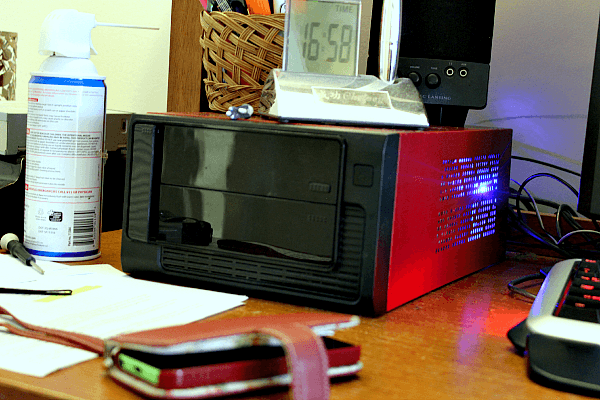 Computers this size are really more for people who want to build their own home theater. But we made it work.

Between its age and the fact that air didn’t run through it so well (because of its size), the desktop wasn’t doing so well. But I wasn’t confident in my laptop, since it was blue screening multiple times a day. I’ve lost so much work to it. So I moved all of my important files over to the desktop. I was sure it would keep me going until we could find a better solution.

And then the power surged. Again. The power in my section of Atlanta has gone out nearly every day this week and it’s happened waaaay too often since I’ve moved here. I have a surge protector, but my desktop had gone through so many surges to begin with…this was apparently the last straw for it. The computer will no longer turn on.

When I said I moved all of my important files over to it, I meant blog files. I have blog posts on that computer that I now can’t get to. (I’m using my laptop right now and hoping it doesn’t blue screen).

The only posts I have access to right now? The pumpkin posts I’m getting ready for September. That’s it.

Anyway, my birthday is in October and Zach was planning to build me a nice computer. Due to the current circumstances, though, this project is getting moved up to now. We ordered the parts last night. Hopefully they’ll be here tomorrow and we can start building.

The benefit for you? Zach has agreed to write up some posts on how to build your own budget-friendly desktop computer. Mine will cost about $520, which is amazing for the computer I’m getting. (One full terabyte of storage space and my games are going to run so much better. I’m so excited!) It sounds intimidating, but Zach figured it out all on his own, so I’m sure he can explain it well enough!

That post won’t be coming today because it’s such short notice (I had forgotten about the posts being on my other computer until I tried to pull them up a few minutes ago). I hope the posts will start going up next week, starting with a post about how to hunt for the correct parts.

I know many of you won’t be that interested in it, but maybe one day some of you will find yourselves in a similar situation and unwilling to pay thousands of dollars for a nice computer. This is a great solution, a great learning experience, and I hope you’ll stick around for it!

Going in, is there anything you hope this mini-series will cover? Anything you’re interested in learning about computers that you hope to learn? Leave it in the comments and Zach or I will see if we can cover that topic!

How to Screw Up an Easter Bunny...