New Year’s Resolutions are usually sincere — people don’t say to themselves “I want to take a half-assed stab at being healthy.” People DO want to quit smoking. They DO want to be in shape. They DO want to have a baby, and get a better paying job, and save for retirement.

But you have to be committed to these goals before the New Year rolls around. In fact, you have to be ready to start making lifestyle changes immediately, even if in modified form. Because while January 1st signifies the start of a new calendar year, actual change starts with YOUR internal clock, and that clock is already ticking.

I really can’t think of a better way to say it.

We need to stop waiting for some magical calendar to tell us it’s time to make a change. If you want something that badly, start now and set yourself small, realistic goals. For instance, you could say, “I’m going to lose 5 pounds by March.” Then when March comes and you’ve reached your goal you can say, “I’m going to lose another 10 pounds by June.” They don’t seem like much, but they add up. And having smaller goals will keep you from getting discouraged and quitting altogether. Which is good, because statistics show that 92% of resolutions fail by February 1. One reason is because people don’t set realistic goals.

But I guess humans can’t help but jump on the bandwagon. Though I’m doing it sort of half-assed. Instead of resolutions, I came up with five things I hope 2014 will bring…and five things I really need to get done over the next couple of months. 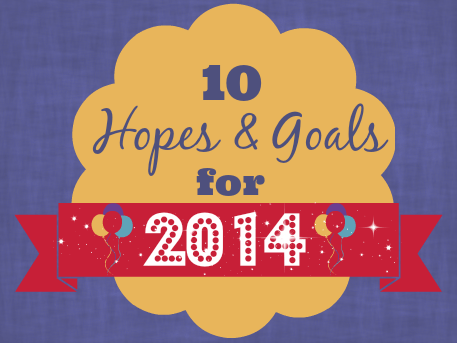 We have a small amount of control over most of these. The shortness of the list is heartening to me, because I remember how long my list was last year. Obviously 2013 was a great improvement for me.

As for achieving last year’s goals, it’s important to concentrate on those, as well. In fact, it’s probably more important because it motivates you to achieve more. Goals I managed to achieve this year:

So I haven’t been completely inactive this year! Which is the best I can hope for right now.

Have a happy (and safe) new year!

Most Popular Posts & My Favorite Posts of 2013

I definitely agree about the new years resolutions. But it’s still fun, and I’ve never been able to just completely skip them. This year I have just made three, and they are all so simple that I have no excuse to not keep them. And the one thing I think is good about resolutions is that you have a little bit of time to plan and get used to the idea. This might not be necessary for everyone, but I need at least one day to really enjoy myself and pig out before I start on a diet or workout plan, haha 😛

Oh, and 2013 (at least July through mid-December) was bad for me too. 2012 was amazing – mostly because of our wedding and lots of traveling – and I’m hoping 2014 will be just as good. Andy is graduating this May and I really can’t wait to find out where we’ll end up. It’s exciting, but slightly nerve-racking too.

Resolutions can be fun! I definitely have a few, but they’re like yours in that I have no excuse not to do them. Planning seems to be key, though, and I know a lot of people who just dive into their resolutions and expect to succeed.

Graduating is so exciting! Now that Zach is finished with school, I’m also hoping we’ll be able to travel some. We haven’t been on a real trip alone together since our honeymoon…almost four years ago. -_-